On a cold and wintery evening the Echo Arena was unsurprisingly a sell out for the current Simply Red, Stars tour, proving that, even after 31 years they can still sell out arenas with ease.

Formed in 1985 after the demise of Mick Hucknall’s first band The Frantic Elevators they soon began to attract the attention of record producers. Simply Red’s success peaked in 1991 with the release of the album Stars which produced 5 hit singles and became the bands best selling album for 2 years all over Europe, and shot the band to the top of the charts on a global scale, this album also became the basis of their current tour.

The show was structure differently to previous tours and didn’t conform to the usual layout of a support band opening the show. The first half had Hucknall performing much slower, relaxed hits proving that at the age of 56 yrs his voice is as good and as powerful as it ever was. A cover by the Hollies “Air that I breathe” finally got the audience up on their feet dancing to what had otherwise been a relaxed and understated first half of the show.

After a brief 15 min interval giving the audience chance to purchase the usual memorabilia, Mick was back on stage and kicked off with “Something Got Me Started” and the audience were up dancing and singing. We were then treated to the album in its entirety ending the evening on the soulful “Wonderland” with images depicted on 6 big screens of Margaret Thatcher and John Major. They came back on stage for the usual 3 song encore starting with Fairground, Lotta Love and finally ending with Overtime we say Goodbye.

Having sold 50 million album worldwide, there are plenty of reasons for you to head out to see Simply Red perform. 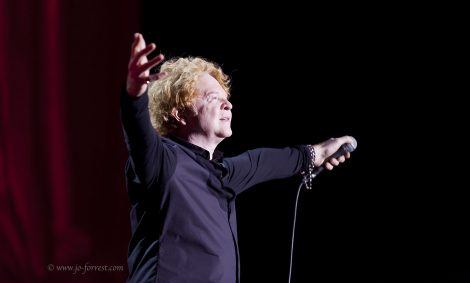