The Manchester Arena was packed with 15,000 people for the young Canadian singing sensation, Shawn Mendes, who, at only 18 years old is selling sold out arenas everywhere. Shawn rose to fame 3 years ago singing 6 second cover snippets on Vine and the rest is history. The crowd was 90% young teenage fans with mums and Dad’s in tow, all having a great time.

Having released his second album, Illuminate sees Shawn embarking on a world tour and he kicked of the night with Holding Me Back and the crowd went wild and that was pretty much the scene to the entire show, with 15,000 young, adoring fans maniacally screaming to every song, even the ballads.

Once the first part of his 90 minute set had finished, Shawn moved to a piano on the much smaller, circular B stage to start part two with Life of the Party while a giant inflatable globe hung above him, not dissimilar to the one Drake used on his tour. The crowd surged to the stage, something I do not think security was prepared for, and for the next several songs the crowd further back got the chance to get a little more up close and personal before he moved back the the main stage. Phone torches lit the arena for almost the entire night and the crowd danced and sang to every song. Shawn finished the night with one of his massive hits Treat You Better, before leaving the young crowd desperately wanting more.

It was a truly impressive show for Canada’s biggest export after Justin Bieber and hard to imagine what he could have done to have made it any better, the young adoring fans were thrilled by every move. 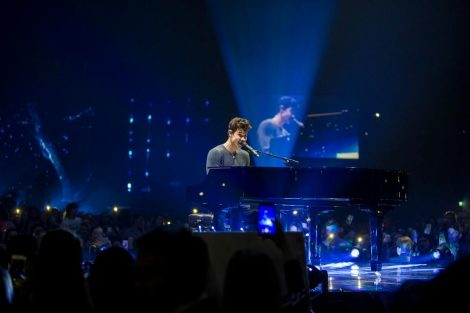