This was to be my first and only experience of the Rock Giants Kiss, who are currently on their “End of The Road’ tour, so if you have never seen them perform, you have missed out on something truly spectacular. Right from the off they performed an explosive set from start to finish. I do not think I have been to any other show and seen the amount of fireworks, pyro and explosions that literally made me jump every single time, even when I was expecting it! Descending from the rafters on individual platforms, you just know you are in for something special as a barrage of fire and pyrotechnics light up the arena and the band kick into their massive hit “Detroit Rock City”.

The two hour rock spectacular was littered with classics from the bands immense back catalogue from “God Of Thunder” to “Lick It Up” to “Cold Gin” to newer and admittedly less popular tracks like “Psycho Circus”. A spectacular drum solo from Eric Singer was followed by a solo from lead guitarist Tommy Thayer who literally had fireworks coming from the end of his guitar, to Paul Stanley with his crystal encrusted guitar and Gene Simmons spewing fake blood from his mouth before spitting the residue into a towel and hurling it into the crowd for one lucky fan to treasure forever.

Later in the set, Paul Stanley got up close and personal with fans by flying out to a solitary platform in the middle of the arena to perform two hits in the form of “Love Gun” and “I Was Made For Loving You” before flying back across the crowd to join band members back on the main stage as the night hurtled towards its finale.

And what a finale! “Beth”, “Crazy Crazy Nights” and “Rock n’ Roll All Nite” took the band over the finish line while one final explosion of confetti brought this night to an unforgettable end. As the intro says “You Wanted The Best! You Got The Best!” and, tonight Kiss showed that they’re carrying that mantra right to the glittery end! 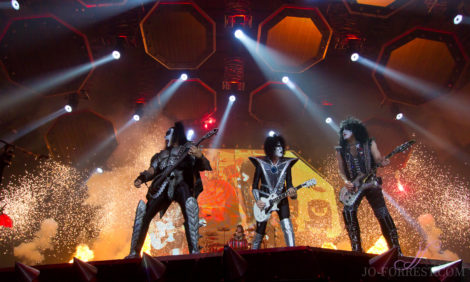 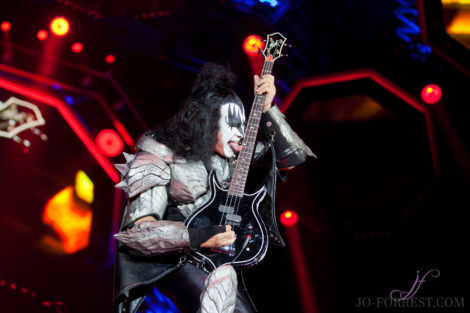 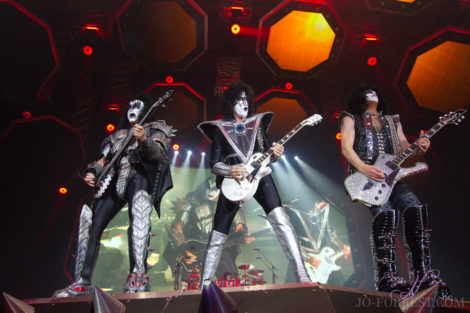