Walking on stage to a blast of pink confetti, The Killers – one of the biggest rock bands of the 21st century, selling over 22 million records worldwide – made their London live show return tonight in Hyde Park with their first performance in the capital since 2013. Charismatic frontman Brandon Flowers called out to the adoring crowd, “Can you believe its been four years? We need to be reacquainted with each other.”

The band opened with their newest single ‘The Man’ – a taste of what’s to come from their forthcoming fifth studio album Wonderful Wonderful. Swiftly showing that they are taking no prisoners, the Las Vegas rockers then took everyone back to ‘Somebody Told Me’ – the mammoth hit that put them on the world map 13 years ago.

In a performance that is sure to be acclaimed as the band’s finest yet, The Killers led a sea of waving arms and screaming fans to powerhouse renditions of their mega hits like ‘Smile Like You Mean It’, ‘When You Were Young’ and a stripped-back version of ‘Human’ before closing with the super smash, ‘Mr Brightside’ and a flurry of fireworks.

The setlist was also sprinkled with treats for loyal fans, including a performance of ‘This River Is Wild’ – an album track from their second album Sam’s Town, which celebrated its 10-year anniversary last October – and ‘Shadowplay’, a Joy Division cover from their b-sides and rarities album Sawdust.

The band – who were accompanied by two violinists on stage – soared on ‘One Day Like This’ with singer Guy Garvey leading the crowd through a tender sing-along of their Ivor Novello-winning hit. Guy appeared to be living for every minute in front of 65,000-strong crowd, excitedly leading the masses into what he dubbed a ‘reverse Mexican wave’. “It’s a beautiful ripple of love,” he said beaming with pride.

The set also mixed big numbers like ‘Grounds For Divorce’ with freshly cut singles ‘Magnificent (She Says)’ and ‘All Disco’ from their latest album, Little Fictions, which topped the UK charts earlier this year. The band also thrilled fans with performances of tracks from previous hit albums like ‘Lippy Kids’ (from Build A Rocket Boys!) and ‘The Birds’ (from The Take Off and Landing of Everything).

Unquestionably one of the most eagerly-anticipated performances of this year’s line up, Tears For Fears made their glorious comeback today, playing all the hits in London for the first time in 12 years. The legendary pop band walked out on stage to Lorde’s rendition of ‘Everybody Wants To Rule The World’ before launching into performing the classic hit themselves. New Zealand singer Lorde covered their song for The Hunger Games: Catching Fire original soundtrack in 2013.

“The last time we played in London, it was 2005,” Rolan Orzabal reminisces. “This is a wake up call. Wake up, Tears For Fears because England quite likes you.”

The band wasted no time taking the crowd down memory lane with their timeless singles, leading a mass sing-along to ‘Mad World’, ‘Change’, ‘Head Over Heels’ and an unexpected cover of Radiohead’s 90s anthem ‘Creep’, before closing with the show-stopping ‘Shout’ – much to the delight of thousands of screaming fans.

Elsewhere, Californian indie rockers Cold War Kids treated fans to a killer set befitting of a glorious summer day in London, featuring ‘First’, ‘Something Is Not Right With Me’, ‘Hang Me Up To Dry’ and ‘Love Is Mystical’ – a single from their latest album “L.A. Divine”.

Earlier in the day, sharp-suited Irish youngsters The Strypes kicked off the action on the Great Oak Stage, followed closely by Twickenham indie-rockers Mystery Jets who performed best-loved numbers from their 12-year long career including ‘Someone Purer’ and ‘Serotonin’.

Blaine Harrison, lead vocalist of Mystery Jets, rocked up in a classic George Michael-style’Choose Love’ top. He said: “It’s London Pride today and I’m so thankful you are spending this day with us” before dedicating ‘Young Love’ to the crowd.

Fans flocked to the Barclaycard Stage to catch top-notch sets from a string of performers including London trio White Lies and Brighton band British Sea Power. Meanwhile over on the Summer Stage, crowds pouring in for The Killers caught performances by Clean Cut Kid, Callum Beattie, and more. 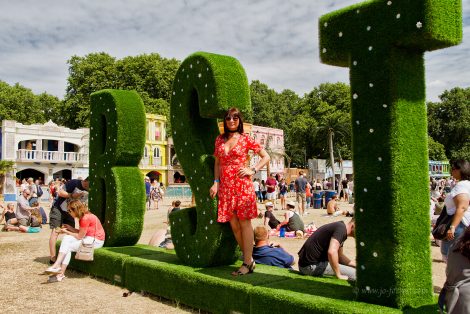 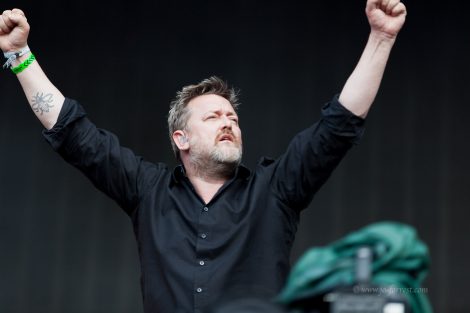 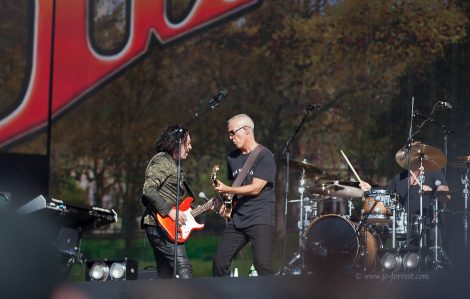